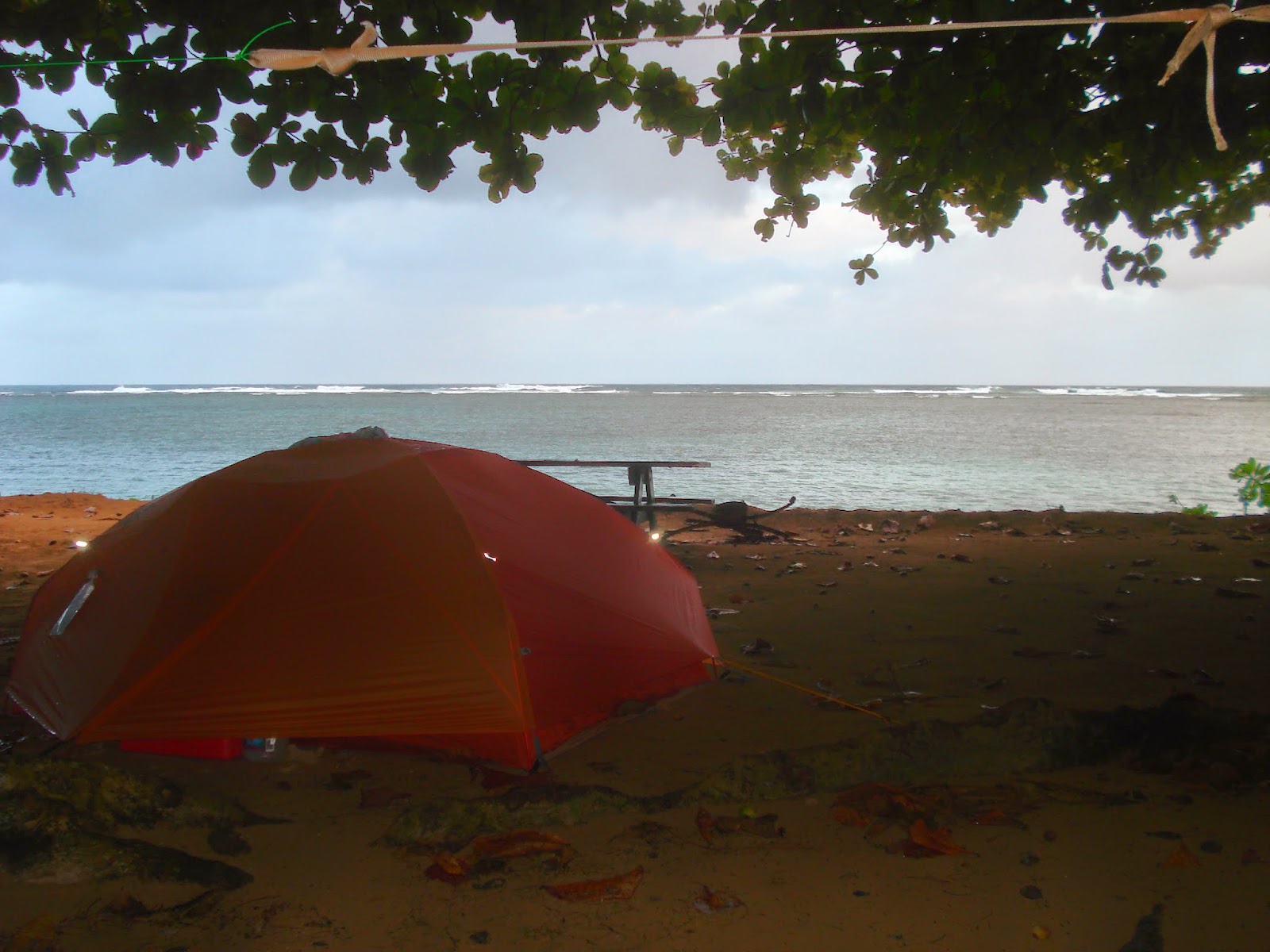 The waves were crashing so fiercely and I knew that I was a bit too close to the shore break for comfort, or perhaps even safety, but since I had only just arrived, I really didn’t know for sure. I woke up every few minutes to look outside the tent to see if the surf was really still 10 feet from the flap and noticed the folks in the tent next to me doing the same thing. Their flashlight was more powerful than mine, so I could see clearly that we were still safe, but even still, we were all pretty uneasy. Finally at about 3:30 AM I began to debate whether I aught to move the tent straight away or if I could wait until daylight and race the imminent rain. Finally I decided that I would be better off moving the whole thing in the dark while it was still dry rather than take the chance on beating the rain. Despite jetlag and the semi-conscious state I was in, I was surprisingly efficient at moving back about 20 feet and once I was settled in my new spot, I felt much more relaxed and fell immediately asleep.

In the morning I noticed that sometime after I had moved my tent, the other campers around me opted to do the same. We all agreed that it was a bit of a rough night, but were glad that we didn’t wait, the rain began in earnest well before dawn. Soggy and fatigued, we all settled in for the thirty hours of heavy, soaking rainfall that would ensue. I did a few errands to make my vinyl home as accommodating as possible, including a grass mat for a front “porch” that would effectively keep me from tracking in a lot of sand… little did I know.

By evening, the rain was picking up a bit and I figured that I might as well snuggle down for the night, even if it was only 7:30 PM. I was grooving on my digs, Facebooking with friends and generally having a nice time until I realized that I was getting rather wet. The rain was coming down so hard that a puddle had formed on one side of my tent and the rain was actually splashing UP from the ground and getting wet, dirty sand into the tent through the fine mesh. I hurriedly moved all my bedding to the center of the tent, the driest spot I had. I silently thanked myself for not going out for the evening to escape the rain; all my bedding had been piled up on the side of the tent that was filthy and soaked. I laid a towel down to absorb it and squeezed myself into the rapidly shrinking semi-damp part of the tent to keep from getting drenched. 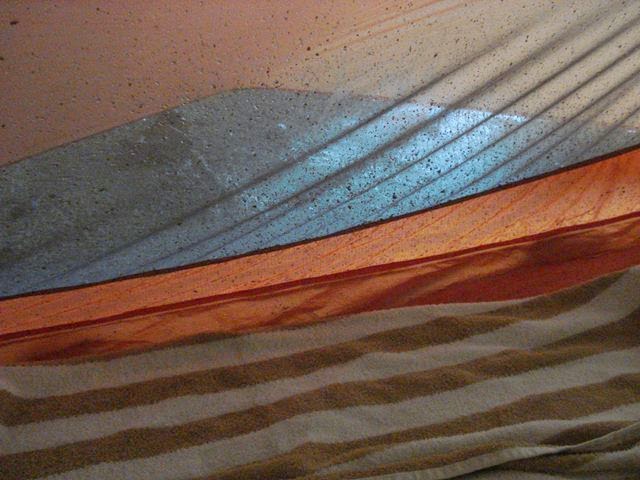 A couple of hours later I heard the rumble of thunder; my friend Mike told me that thunderstorms are pretty uncommon here on Kauai, with perhaps only two storms a year. I was excited that I was going to witness this rare event from such an intimate vantage point; my enthusiasm was literally dampened as the storm got closer and it became evident that I was in a dangerous situation. Smart phone in hand, I started checking the local weather; this was in fact a very dangerous storm. The weather advisory insisted that people seek shelter in a strong building due to ground to cloud lightening and 60 mph gusts of wind. I looked around my dirty, wet tent and realized that if I left it, it could very possibly blow away to the sea. The time frame for the most severe part of the storm would only last for another 15 minutes, so I decided to stick it out. The wind picked up and one of my tent poles collapsed; I frantically began to repair my shelter from the inside and hold onto the supports while the storm raged and the wind howled on the other side of a millimeter of material.

I prayed loudly and began to meditate, I felt surprisingly calm; it was like part of me was observing the predicament I was in, but simply going through the motions of survival, no time to panic. I linked up to Facebook again to ask for some helpful energy and protection, and immediately felt much safer. The tempest raged on for what seemed like an eternity, but in fact was only another 20 minutes. The pleasant thing about all the wind was that it almost completely dried up the wet puddles of sand that has worked their way into my synthetic home and left me with only the soaked, sandy towel and a clammy tent. It continued to shower for part of the next day, and the forecast called for much more rain, but it miraculously cleared up.

I felt that I had been washed and initiated; I had passed a test. In many ways it felt quite metaphoric: I had been in survival mode since my world flipped upside down in May. I had to keep going, head down, nose to the grindstone to try to make a living, find a means to stay in my home and look for answers. My body, mind and spirit had been totally focused on survival in order to get to Hawaii so that I could finally UNHOOK. So, here I was, literally faced with a survival situation and having gotten to the other side of it, it truly delineated for me that I could finally relax. I am here. It’s time to surrender. 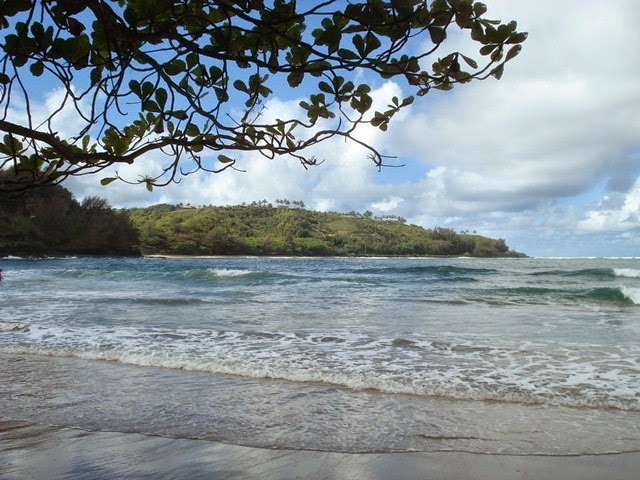