After the storm, I started to get my Kauai groove on and found that unhooking and relaxing was not as natural to me as it was the last time I was here, eleven years ago. I went about doing the things that I had so enjoyed as a couple when I was here with my ex-husband, and found some peace while combing the beaches for shells. The early parts of my days were enjoyable because Mike had the mornings off from work and he is a great host and knowledgeable tour guide. It seemed that no matter what I asked him about the island, ‘What type of plant is this?’ ‘What kind of bird is that?’ and ‘Tell me the name of that tree,’ he was ready with an answer and a fair amount of lore to go along with it. It was astonishing.

In the afternoons I amused myself with hours of shell picking and beach walking, the weather improved considerably and the scenery is beyond compare. My heart was beginning to ask questions like, “When are we going to do our work?” and I would notice all the couples holding hands, children playing in the sand, and seldom anyone like me, alone. My heart had been holding this heaviness for some time now, this trip to Hawaii was for my heart specifically… custom designed for emoting and healing the wounds of the past year or ten. I keep finding distractions peppered with intermittent bouts of tears; like the weather now: sunny with intermittent showers. Some distractions are worth sharing here and I know that having fun is also a big part of the healing process; it can’t be all ceremony, tears and meditation.

I took myself out one night for dinner and decided to just order a couple of appetizers. Here’s what I got: Local mushroom cassoulet with white beans and bitter greens, as well as locally raised organic lamb ribs with a green chili glaze. It was delicious and generously portioned; I had to take half of it back to the camp to cook with eggs in the morning! Campside, I also prepared a lovely dinner with an slab of Ahi (the local tuna) rubbed with a chili powder  (prepared before I left) and encrusted with macadamia nuts then seared on my camp stove… delicious. I served that with some cut up apple bananas and an avocado that a shopkeeper gave me because she had so many that fell off her tree in the storm; plus I had a salad with fresh key lime juice and olive oil. That was all amazing, especially as I was eating it on a picnic table a few feet from the mighty Pacific.

My first Sunday on the island, Mike and I went to the Princeville St. Regis for brunch; this was no ordinary buffet, let me tell you. The fact that my buddy has company perks and we got to enjoy this incredible spread for half price didn’t hurt at all either. We consumed vast amounts of delicacies that were locally sourced and spectacular; we were both so obscenely stuffed, that even the light Thai soup that Mike prepared for our dinner hours later was almost too much.

I was also clued in on the local bakery in Kilauea, about five minutes from my campsite at Anini Beach where I stayed for 4 nights. What a haven that was!! One morning I went with Mike there for our morning Joe and heard someone call my name; it confused me obviously, who did I know on Kauai? There was Jamie, the sweet guy who picked me up at the airport. It is a small island (in fact I ran into him again at the Hanalei Farmer’s Market). The Kilauea Bakery has the BEST cup of Kona coffee to be found and pastries that would make you cry. I had a sticky bun there one morning that was so good, that I could hear angels singing when I bit into it. This became my morning pilgrimage, coffee, pastry and internet service. Aloha.

The farmer’s market in Hanalei was remarkable; by far the largest on the island, this Saturday market features all things local: organic produce, baked goods and crafts. The fruit was the best I had ever seen: apple bananas are so sweet and tangy and bear little resemblance to the starchy yellow-skinned fruit we have on the mainland. Papayas are so sweet and juicy that the ripe ones get snatched up fast. A rainbow of citrus is available at nearly every stand including “killer limes” (they were), sugary tangerines, ruby grapefruits (only 50 cents each!), and kaffir limes. Pineapples are always perfectly ripe and fragrant here and the avocados were available in great abundance. 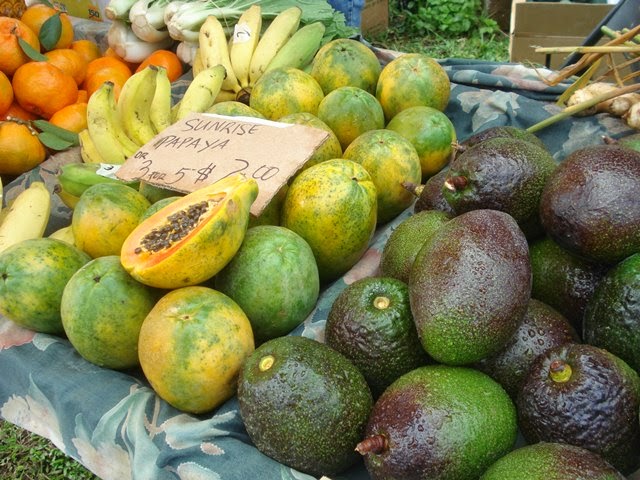 Shopping at the market with Mike was a blast because he is a professional chef at a five star hotel and really knows his shit. He sniffed, squeezed and tasted at every booth and gave me a play by play of which prices were too high, who had the best offerings and who we should come back to visit at the next market. There was a loaf of bread that we absolutely had to pay the full price for, especially when we saw a man and his daughter leave the table with 6 loaves. Called “Hawaiian Christmas bread,” the purveyor boasted that it was a “stolen recipe.” On closer inspection, we saw that the soft, glazed pastry was stuffed with tropical fruit and several veins of marzipan. Oh dear Lord. 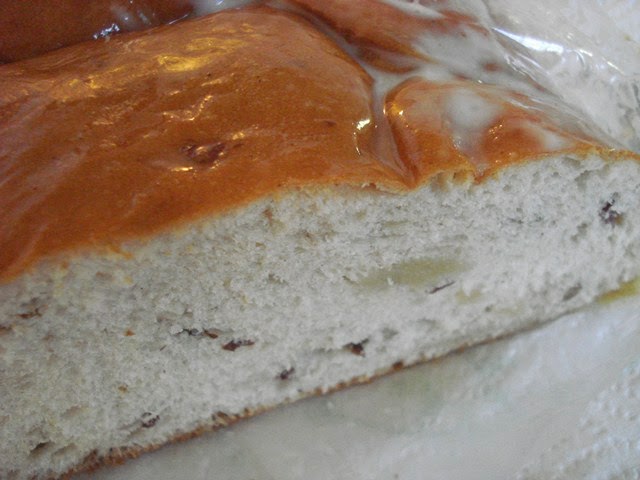 This particular market was where Mike introduced me to a fruit I had only read about but never eaten personally: the mangosteen. Popular with some new age health marketing geniuses, the mangosteen is a cute, round purple orb festooned with a cap of chunky green leaves on the stem and a star at the blossom end that looked like it was from the set of “The Dating Game”. To get to the fruit, this purple husk must be scored with a knife and removed; inside is a small, white center divided into sections, one larger than the rest that contains a seed.  The taste of this tiny morsel is worth the buck and a quarter apiece; creamy and lightly musky with a bit of tang at the finish; the mangosteen tastes like nothing I have ever eaten. What’s even more wonderful about this delicacy is the way it makes you feel instantly; it’s like your heart does a little cartwheel and the inner child comes out to play. This is truly the fruit for me, boy howdy. 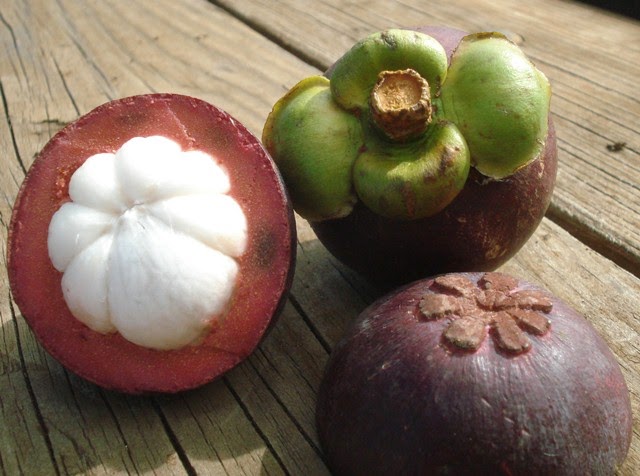 The reason Mike did such careful shopping at the market was for a special dinner he was planning: a divine curry with fresh shrimp and fish as well as many local vegetables including a sweet potato, long beans, coconut, and local mushrooms seasoned with wild tangerines and kaffir lime leaves and fruit that we foraged near the Hula Heiau, (but that’s another story). It was amazing!! I even got to eat the leftovers at my camp a couple of times, much to the envy of fellow campers I can imagine, for the fragrance alone was swoon-worthy. Okay, so if I haven’t made it clear by now, the food on Kauai is marvelous! Despite the fact that I have been gorging myself with delectable treats daily, I have lost a lot of weight in the short time I’ve been here; walking, breathing clean air and eating light, clean foods (even if in abundance) has given me renewed energy and a feeling of all around well-being.

I have met some fascinating characters here, but that is something for me to “talk story” about in my next installment. Aloha, my friends.