I have been blessed on this journey to encounter so many kind and helpful folks; at every camp, there is a good neighbor, on every beach there is a friendly encounter, and at any random location there is a new friend to be made. At my first campsite, Anini Beach, I met a super nice couple from California who run a wilderness school. In the middle of the hellacious storm, they escaped the misery to get some grinds (that’s food to those of us on the mainland). They were kind enough to bring me back a half a pizza because they knew I was reluctant to go out and leave my tent in the middle of the storm, and they were always ready with a morning cup of coffee if I wanted it. Before I left a few days later, I found a cast off grass beach mat and left it for them as a thank you; I have found those things to be indispensable for sandy seaside camping… it keeps the majority of the beach out of your tent.

I don’t even need to go into further detail on just what an awesome friend Mike has been to me on this journey, but I will anyway. Aside from the cooler, the beach chair, the towels, the pillows, the fantastic meals, the leftovers, the warm showers, and the laundry facilities, Mike is a great source of endless information about the plants, birds, trees, beaches and island lore. Seriously, the guy obviously reads a lot and listens carefully to what people tell him when they “talk story.” At this point in my trip, I have been dealing with a LOT of rain, and when I called to check in with him he told me that he’s been looking into hotels and condos that are going cheap right now due to last minute holiday cancellations. The level of thoughtfulness that it takes to even have that sort of thing occur to someone is a rare quality indeed. Mahalo Mike.

Mike’s friend and roommate Lyza is a vivacious and gregarious woman; one afternoon we went to check out some of the North Shore beaches and she gave me the low-down on the best surf spots and the local names for them: Tunnels, Cannons, Koko, Middles, Chicken Wing, Dump Truck, West Reef and The Killing Floor to name but a few. We had a fun afternoon ogling tight bodied surfer boys as they passed in front of us coming off of Cannons, broken surfboards in hand. I found out that that’s a good thing, to break a board; that means that it was gnarly, dude.

One morning I was walking on Haena Beach, doing my usual AM shell picking; I was totally zoned out on the meditative task of eyeballing Puka and kahelelani shells. Being so completely myopic, and seeing only two or three feet directly in front of me, I was alerted abruptly by the shrill sound of someone yelling and whistling. I glanced up, but it didn’t appear that anyone was looking at me. I kept going a few more feet when into my field of vision appears the tail of a monk seal. Right there. In front of me. It was attached, naturally, to a full grown, lazily napping Monachus schauinslandi weighing approximately 300+ pounds. It is illegal to harass or otherwise annoy one of these endangered animals, so the fact that I was only a couple of feet from it concerned me greatly. I went into the water to give it as wide a berth as possible and quickly hustled away. I looked up the beach at a couple of tourists with mouths agape and said, “Oh my god. Do you have a cell phone? Can you call someone? That needs to be roped off, I almost tripped over him!!” They didn’t speak English.

I scanned the beach further and saw that over by the emergency lifeguard equipment (strategically placed every few hundred yards along all the beaches here) a guy was hurriedly gathering the signs and yellow rope to cordon off the seal. I ran over to help and apologized profusely for being so engrossed in beach combing that I didn’t see it. He was generously non-chalant about my bone-headed move and accepted my assistance.
Apparently this old-school surfer, Billy volunteers with protecting these nearly prehistoric mammals and knows most of them individually. This particular seal was new to him and lacked the usual defining scars that most of the resident seals are tattooed with; there are scars from fishing nets that get caught around their necks, deep marks from injuries sustained by encounters with boat rudders and a telltale round wound that they get on their underbellies from bites taken out of them by the “cookie-cutter” sharks. Between that and the constant increase in tourism on their preferred napping areas, the monk seals endure a lot on a regular basis; all they want to do when they beach themselves is to get a solid rest before going back out into the daily challenges of their watery terrain. He sure was cute… the seal, that is. 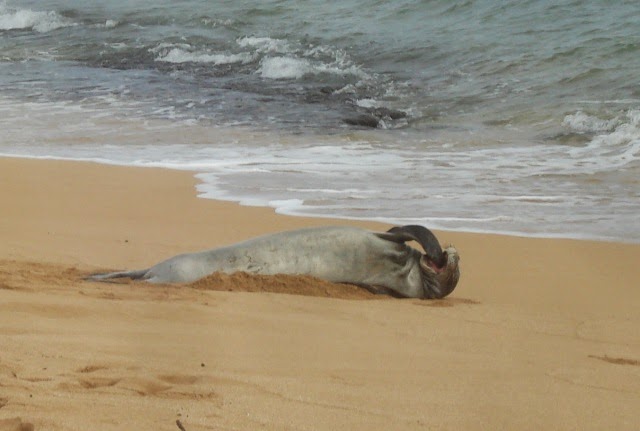